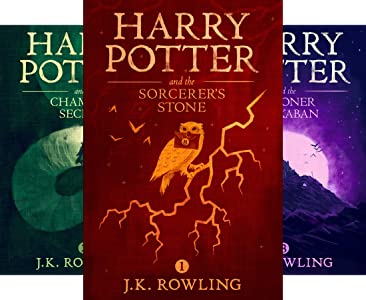 I think Harry Potter is the best chapter book series that you should start with. While the books are big, a 8 year old child could probably finish one in several weeks, assuming they read for about 30 mins every day. I really loved this series when I was young, but when you grow older, you might lose interest or find other series that you might enjoy more. After you read Harry Potter, I would recommend the Brotherband Chronicles series, which also teaches you about loyalty and bravery. Also, there are 7 books in this series, and each one, in terms of the storyline, is very different.

I would recommend this book for kids 6 - 10, and I would rate it 4 out of 5 stars. In this series, Harry Potter, who Voldemort attempted to kill, joins Hogwarts, a school for magical students, and meets Ron and Hermoine, who end as his best friends. Voldemort has many people with him, and together they get Harry into quite a bit of trouble, but often, the trio get themselves into trouble. Toward the end of the series, Dumbledore, the Headmaster of Hogwart dies, but not before teaching Harry how Voldemort is still alive, and what he uses to stay alive, and finally at then end of the series, Voldemort is killed, and his Death Eaters are locked up, but not without 50 people of Hogwarts dying. Also, the moral in this series is that love, and together with others, good can always win against evil, no matter how strong it is.

I read each of the books many, many times when I was young, and I really liked them then. There are also movies for each of the books, and I really enjoyed those, because unlike other movies, this didn’t differ much from the books, and it made the movies much more enjoyable. I also really like how J. K. Rowling managed to make these books elaborate, but at the same time they weren’t overwhelming, and they had a lot of detail, imagery, and description, which all contributed to this being my recommended first chapter book series to read.

Harry Potter and the Philosophers Stone

Harry Potter and the Chamber of Secrets

Harry Potter and the Prisoner of Azkaban

Harry Potter and the Goblet of Fire

Harry Potter and the Order of the Phoenix

Harry Potter and the Half-Blood Prince

Harry Potter and the Deathly Hallows