The King of Attolia 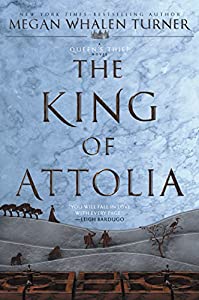 I highly, highly recommend this book, and this series to kids 12 and up, because this series does have some violent parts in it. This is the 3rd book in this series, and I absolutely love it. The book is just so, so interesting, and I would gladly read it over and over again.The book takes place in the palace of Attolia, and the time setting is some time after the last book, The Queen of Attolia. At the beginning of the book, it is apparent that the King of Attolia, a former Thief of Eddis, Eugenides has some problems with being King, with his attendants harassing him, not being strong enough to make decisions in court, and others. He also helps a young squad leader, Costis and forgives him for the things that he did. However, soon it became apparent that people didn’t want Eugenides as King, and there were assination attempts, things put into his food to have nightmares at night, and many more. Eugenides managed to get proof of who the tractors were, and they were put into exile soon after. After that, his attendants started treating him with more respect, and he wasn’t harassed, embarrassed or hated, and soon after,. The book ended. This book is 5 out of 5 stars, hands down. This book is absolutely amazing, I love it so much, and I just can’t stop reading it!