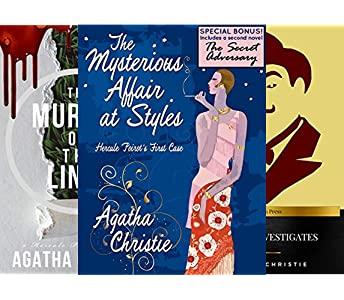 The books by Agatha Christie are super exciting, intense mystery books.  Now the thing about mystery books is that you never know what will happen next.  You don’t know if an important character is murdered, or if the case takes a twist, and so on.  Now these books have all of that.

Now keep in mind that basically all these books have murders in them, hence the ages 10+ rating.  I don’t think anyone below that age should read these books, because of the violence.  The series earns a 4.5 Star rating, because some of the books were not super engaging.

My favorite book that I have read so far would be And Then There Were None.  This is regarded by many as Agatha Christie’s best book ever, and I agree with that.  Another thing that I would recommend is that you read some of the books that are not as good as some of the best, because once you read those, the other ones might not seem as interesting.  Another book that I really recommend reading from Agatha Christie is The Murder on the Orient Express.

As of now, I think this series is one of the best mystery series out there.  The writing of Agatha Christie really takes it to another level, and this series is just really good overall.  Another thing that I would like to add is that some books can start off quite slowly, but it gets much faster after a while.

Peril at the end house

And then there were none

The mysterious affair at styles

Death on the nile

Murder on the orient express

Evil under the sun