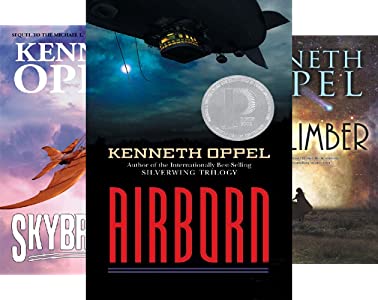 The books in this series are all about fantasy creatures and a sci-fi setting.  And honestly, I think that combination worked out extremely well.  This series by Kenneth Oppel was really fun for me to read, and I can highly recommend it to anyone who is 10 and older.  The reason for this is that it can be a bit inappropriate, and it has violence and death as well.

This series is about a boy called Matt Cruse and his companion, Kate de Vries.  They go on journeys to space, pirate islands, and the top of the world.  Together, they discover mythical, fantasy creatures, like the cloud cat, or the creature called “etherian,” which can live and thrive in space.

There were a lot of moments where you had no idea what was going to happen next, and the books were really detailed.  They were just super enjoyable to read, and I read these books several times.  I am sure that anyone who reads these books will enjoy reading them, and there were so many factors that went into that.

In the end, it has to be 5 Stars.  Every single aspect of the books made it this way, and I don’t think there was really anything wrong with the books in this series.