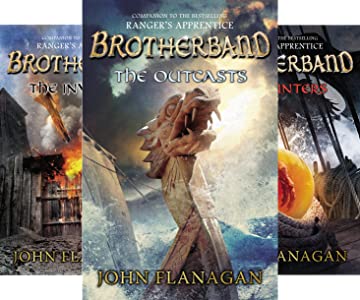 There are 8 books in this series, and for me, each of these books seem to stack on top of each other, making each one better than the last.  I personally really liked the 4th and 8th books, but still, all of them are really good.  Also, I would recommend that you read the books in order, otherwise it doesn’t really make a lot of sense.  Also, I would rate this series 4.5 stars.  The books in this series almost seem like a mix of fantasy, realistic fiction and history, because of the time and place aspect.

In the first book, Hal, who is the main character forms a brotherband, a loyal group of Skandians, and attempts to win the year long competition, however, by the time the second book takes place, they are on the run.  In the second book they attempt to stop a band of pirates from taking over a town, and when the third book takes place, they are back on the run.  And so the series continues, with Hal and his brotherband fighting a series of battles against pirates, slavers, eastern riders, and more.  And, they always return home, victorious.  The most interesting part in the series is all the times when Hal and his brotherband fight against pirates.  I liked this book because of how John Flanagan writes his books, with so much action, so much suspense, and all the description and imagery.