House of the Scorpion 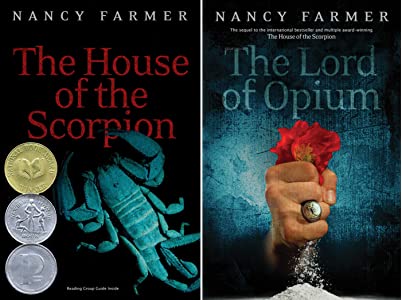 The House of Scorpion is a series set over 100 years in the future, where drug lords clone themselves, just to survive longer, by using the organs of a clone.  Where the world is polluted, most common animals we know about today are virtually extinct.  Where thousands of people are turned to to eejits, or humans who have been injected with chips that make them slaves and zombies.  They will not eat without permission.  They will not drink without permission.  They cannot rebel, they do not have feelings.

People hate Matt, they don’t think he should exist.  They despise him, look down on him, as if he were dirt.  When the time comes, when El Patron is dying, Matt only then realizes, this was his destiny, to simply provide organs to El Patron.  But his former caretaker had been poisoning Matt, not enough to cause any pain or damage to him, but enough to ensure that his organs cannot be transplanted into El Patron, who is over 100 years old.  He becomes the new Lord of Opium, and a new story, a new book unfolds.

I really, really love this series.  It is amazing, sci-fi books that tells a tale out of a horror movie.  It is so detailed, with action, adventure, suspense and imagery, but easy to understand and just an overall great read.  This series has to be ages 10+, because of the violence involved.  This also easily earns a 5 Star rating as well.

The House of Scorpion

The Lord of Opium