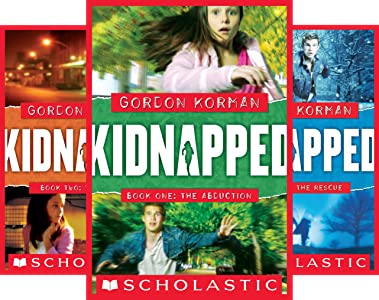 The Kidnapped Series consists of 3 relatively short books by Gordan Korman.  In this series, a girl called Meg, a 11 year old in the Falconer family gets kidnapped by 3 people, and she is hustled into a van, and her 15 year old brother’s attempt to save her is in vain.  The very same FBI agent that put Meg’s parents in jail for over a year, only to discover they are innocent is working with the Falconer family to help solve the case.

Meg gets taken to a warehouse amongst hundreds of others, and in her escape attempt, she manages to leave a sign that only a brother would recognize.  That happens to be a flag, purposely broken by a brick.  A similar incident happened in school, and so, as Meg’s brother, he recognizes this, and tells the FBI agent, agent Harris.  He doesn’t believe Aiden, but he does agree to alert the local law enforcement team in the area.  What they do stumble upon is a S.O.S letter secretly released by Meg, confirming that she is trapped in one of the buildings.  However, due to there being only 2 agents, they aren’t able to rescue Meg, and so she is taken into a car and bustled away.

The FBI have no idea where Meg might be, but she tries to leave another trail for her brother, 4 deliberately clogged toilets along an isolated, empty highway.  Again, it is a trail that only a brother would know.  Agent Harris gets replaced by the book FBI agent, and he doesn’t listen to Aiden.  Aiden realizes that his only option is to call agent Hnarris, but halfway through the voice recording, he realizes it's a no go, and decides to leave by himself.  Another person, by the name of Rufus Sehorn is the owner of the BlogHog.usa, a blogging website, and in this case, he is spreading the word about this case.  Meg is hidden inside a remote shack in the mountains.

Agent Harris picks up the trail of Aiden, and he eventually manages to find him.  Meg is forced to spend her 12th birthday tied up in ropes, but with help from one of her kidnappers, who found out that the other 2 were planning to kill Meg, she escapes.  She is forced to spend a blizzard out in the open, but she manages to find a cave, sheltering her.   She stumbles into a shack, only to be recaptured, as her now 2 kidnappers are sheltering there.  The 3rd kidnapper is captured by Agent Harris, but he helps him by telling him everything about the operation that he knows.  Finally, the ransom demand comes, to meet in a coal mine with 3 million dollars.  Rufus Sehorn brings Aiden’s parents to the coal mine, only to reveal that they are a part of HORUS, the group that the Falconer parents were accused of being associated with.  However, the plan goes disastrously wrong..

This series is really fun to read and super interesting, and I would easily recommend this series to people 8 and up.  It can appeal to older readers as well, and it easily earns 4.5 Stars.  The only thing I didn’t like was that the individual books were quite short, and I would have liked it if this entire series was one whole book separated into parts.