The Heroes of Olympus 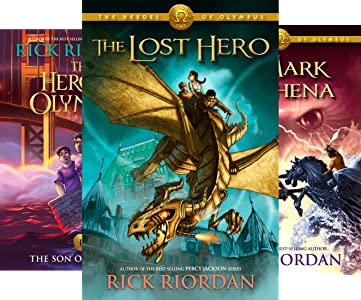 Heroes of Olympus is a really good series. Not Percy Jackson level, but still really good.  After Percy Jackson, this is probably my most favorite series written by Rick Riordan.

This series covers the story of seven Demigods, on their quest to stop Gaea (The Earth Mother, her children are the 12 Titans).  Unknown to most, there are 2 camps for Demigods, Camp Half Blood, in New York, and Camp Jupiter, in San Francisco.  Both camps are unaware of the other's existence, with the exception of a few, such as Chiron, the leader of Camp Half Blood.  Percy, Annabeth, Jason, Piper, Frank, Hazel, and Leo travel to the other side of the world, to Rome, Athens, and other, dangerous places.  They all face dangers, capable of killing them.  They must fight Giants, Spirits and Gods, Monsters, and the Earth itself.

I can easily recommend this series to anyone 8+, and rate it 5 Stars.  However, it is almost essential that you read Percy Jackson first, otherwise a lot of things will not make sense.  I think this series is one of the must reads, at the top of the list.  It is super fun to read, with lots of funny, witty moments.  I just love the series, with every aspect, the plot, suspense, humor, characters, and detail.

Overall, this series is simply amazing, with excellent books about Greek and Roman mythology. They are full of adventure, suspense, and mystery. The humor and wit that Rick Riordan writes with is great. Each character has their own thing they are known for (their character). Every sentence is full of detail, making a vivid image in your mind, the Argo II, Camp Half Blood, and Tartarus. This will be a series that I will remember forever, and a series that will remain excellent for years.

The Son of Neptune

The Mark of Athena

The House of Hades

The Blood of Olympus