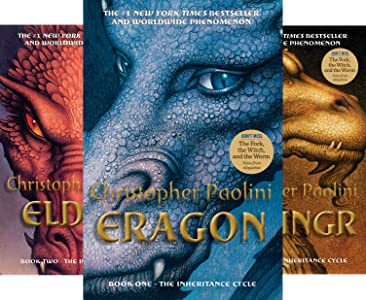 This series is really, really good.  It flows extremely well, and there are plenty of twists and turns in this series.  There is a load of detail, and so much imagery and description.  What I think was really good about this book was the variety of characters in the series.  There were elves, dwarfs, humans, and dragons.  There were so many fantasy elements, such as a Dragon’s heart of hearts, magicians being able to communicate mentally, and magic.

Eragon, a simple farm boy, finds a random object in the woods.  That was a dragon egg, and it hatched, revealing a little, sapphire blue Dragon.  Eragon has to work to keep it secret, and the Dragon becomes several times the size of him.  He enters reality, where magic is real, there are Dragons and their Riders, but is also fighting the forces of evil, attempting to rule the humans, the dwarfs, the elves and the Dragons.  He discovers that he is alone.  There isn’t another Dragon or Rider in the entire world, and it is up to him to save the world.  He used to be a simple farmer, and now he has to save the world.  He has to fight against Shades, armies and pain.

I really liked this series when I first read it, but it lost its appeal soon after.  I would rate this series 4.5 Stars.  It is great the first time, but not so much after that.