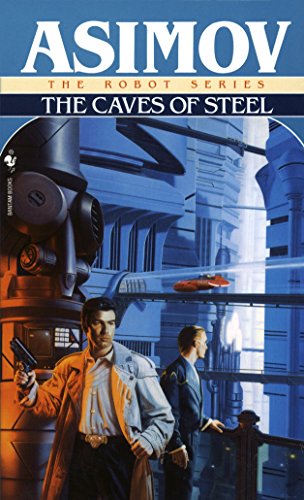 The Robot Series is another legendary series written by Isaac Asimov.  This series is set thousands of years back from the Foundation Series, and some time into the future as of present time.  This series goes over the happenings of Elijah Baley.  He used to be a simple person living in New York, but he is set to investigate the death of a prominent spacer.  Spacers are people who have colonized different planets, and on their home planets, Robots outnumber them by over 10 to 1.  But the Robots are bound by the 3 laws of robotics, preventing them from harming humans, preventing them from disobeying humans - unless it prevents the first law - and the 3rd law, a robot has to protect its own existence, unless it comes into conflict with the 1st or 2nd law.

Elijah travels to Aurora and Solaria over the course of planets.  He investigates the death of a humanoid robot, the death of a man, on a planet where people rarely come into contact with each other, and the death of an important Spacer, in a city of over 10 million.

This series is simply amazing.  Unlike some other series, this keeps its appeal, even after reading it.  I would easily recommend it to Ages 10+.  Anyone above that age will definitely find interest in this series, and will definitely enjoy it.  This has to be 5 Stars.  I honestly think that this is an amazing series for intermediate and higher readers.  Almost anyone who loves Sci-Fi books will love this.  It can seem long, but it is really easy to understand, and flows along smoothly and quickly.

The Caves of Steel

The Robots of Dawn