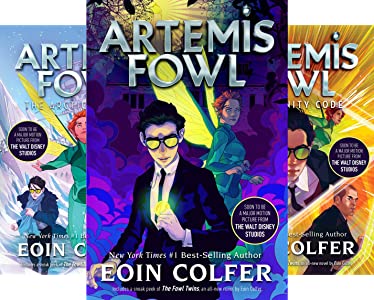 There are 8 books in this series and it is all about sci-fi and fairies. Weird combination right? Well Eoin Colfer manages to make it fit perfectly, and that makes these books amazing. In the first book, Artemis, who is a 12 year old criminal genius attempts to find a fairy and capture it, to fund rescue missions for his father. After quite a hard fight against the fairies, with his loyal bodyguard Butler, he ends up with a metric tonne of gold. And so, the story continues in the next book, where there is a goblin uprising in Haven, the home of the fairies, and Artemis is the first one to blame. However, he is proven to be not guilty, and he joins forces with the fairies on the condition that they help find his father. On to the third book, where Artemis, using fairy technology, creates a computer, the most powerful one, by a long way in human standards. When showing it to a Chicago billionaire, it gets stolen from him, and the rest is all taking it back. In the 4th book, Opal Koboi, the person who was behind the goblin uprising kills a fairy police force commander, and an innocent fairy, Holly, who helped Artemis in the previous books is blamed, and she goes on the run. However, it becomes apparent that Opal Koboi is behind this, and soon, she is captured again, though not without a few near death experiences for Artemis and Holly. And so the series continues, from time travel to berserkers, alternate dimensions to a disease that causes paranoia and multiple personalities. This makes the rest of the series crazier, and better than the previous ones. There is also a movie about the first book, but it is completely different from the book, and I prefer the book much more. Of course, that is a personal opinion. I really like how Eoin Colfer writes his books, because there is so much imagery, description, especially in the 6th and 8th books. There is only one thing that I would have wanted to see differently, and that is more books in the series, it is just amazing..