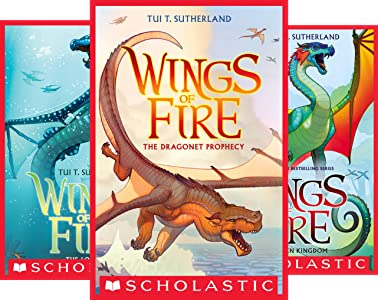 This series is really long, it has 14 books to date, and at least one more coming. The books are also amazing, integrating different tribes and types of dragons, while making it very interesting. The first 5 books are all about the same thing, from different perspectives, the next 5 are like that, and so on. In the first 5 books, the queen of the Sandwings died, and her 3 daughters are fighting over the crown. But it isn’t a fight, it’s a war. A war that has been going on for more than 15 years. So, it is up to the dragonets of destiny to save them. Anyways, in the 1st 5 books, the 5 dragonets escape from their hiding place and get captured by the Queen of the SkyWings. They eventually escape and head over to the palace of the SeaWings in the Ocean. They find it, and Tsunami gets reunited with her family, as well as getting 2 new sisters. However, their mentor gets poisoned, so they head to the rainforest, home of the RainWings to see if they can cure him. They aren't able to find the cure, but Glory, another one of the dragonets becomes Queen of the RainWIngs through a series of challenges. They also discover a tunnel that leads to the desert, where they find the cure for their mentor. And it goes on until the 5th book, where Sunny is kidnapped, but escapes and finds her long lost mother. Then she makes a plan to stop the war, and it works. And this kind of thing happens again in the next 5 books, but instead of a war, there is a 2000 year old dragon who wants to take over the world. He is stopped, and in the next 5 books, the perspectives are from tribes all the way to another continent. Here, one tribe is ruling the others, and a group of people are trying to stop her, the Queen of the HiveWings. Eventually, they are forced to escape from their continent and flee across the ocean, only to land in the IceWings territory where they move out and settle down on the coast of the desert. And that is the end of the series. I really love these books, and I think they can be a good intro to chapter books, so I would recommend it to kids 8 and up.